close
We've sent you an email with a link to update your password.

A password reset email has been sent to the email address on file for your account, but may take several minutes to show up in your inbox. Please wait at least 10 minutes before attempting another reset.

Registering an account with OnKeto allows you to access your order status and history. Just fill in the fields below, and we will get a new account set up for you in no time. We will only ask you for information necessary to make the purchase process faster and easier.

Rich, sweet and buttery, cake isn't usually associated with healthy eating, but all the eggs and cream fit comfortably within a keto diet. Check out our range of keto friendly cake mixes that cuts down on the carbs by using almond flour and corn-derived erythritol as a sugar alternative.

Can you eat cake on a keto diet?

If your primary goal is to lose weight, cheating on your keto diet from time to time is not going to destroy your progress. Even if it kicks you out of ketosis. Yes, you heard that right. If you just couldn't resist that slice of cake or pasta dinner and chose to indulge in a few extra carbs, don't stress.

General cake is made with all purpose flour which is high in carbohydrates.
If you can enjoy a small slice of cake while still keeping under 50g of carbs per day then it’s doable but most tend to keep dessert out of their keto diet.
However here at Onketo we feature a huge range of Keto Friendly Cake Mixes.
Instead of all purpose flour, many of these products feature almond flour which is lower in carbs and more nutrient-dense than wheat and coconut flours. It also has less phytic acid, which means you receive more nutrients when you eat foods containing it.

Almond flour is considered as one of the best flour for weight loss because, unlike wheat flour, it is low in carbs and has an extremely low glycemic index due to which it reduces sugar levels in the blood, ultimately leading to weight loss.

Can you make your own cake with keto baking?

Keto baking is the making of bread and other baked goods such as cake by replacing wheat flour with low-carbohydrate sources and other functional ingredients. It is practiced by individuals following the strict low-carb ketogenic diet.

What can be used instead of flour in Keto?

As an example this cake contains 50.5 grams of carb per 100g serving

This is too high for the keto diet which aims to reduce carb intake to less than 50g a day. 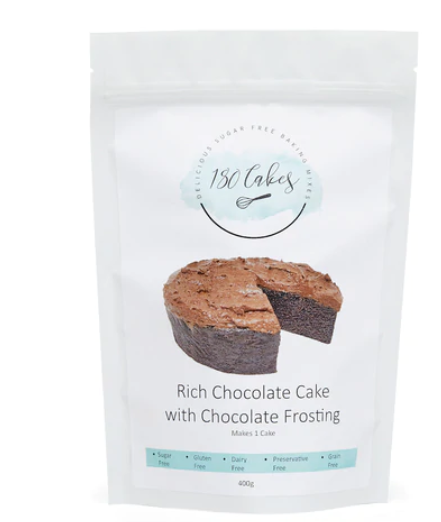 This mix when baked with the package instructions will produce a rich chocolate cake with frosting that contains less than 3 carbs per serve!

What brands of keto cakes/ bake mixes do we sell?

We feature a variety of local and international brands such as:

The Monday Food Co, who’s founder Indi grew up on a farm in NSW and is a qualified yoga teacher. She has a background in naturopathy and raw food production that lead her to creating the Monday Food Co in beautiful Byron Bay.

180 Cakes was created by Perth Chef Kara when she decided to create baked goods that wouldn’t have negative impacts on people’s health. Proudly Australian Owned and Made!

One Minute SNAXX is an Australian owned business by mother and daughter team, Rae and Madison. SNAXX came about when Rae was tired of constantly cooking and preparing keto foods that took hours out of her day. She wanted something that could cook quickly that still tasted amazing. Something you could put in the microwave for a minute and have a keto-friendly, low carb, and gluten-free cake that still tasted amazing!

PBCo. Low Carb Foods first came to life back in 2012 when founder Anna was a cafe owner. She baked her own natural, low carb protein bread for customers who wanted better, healthier options.